What we know is bad. What we don’t know is scary. 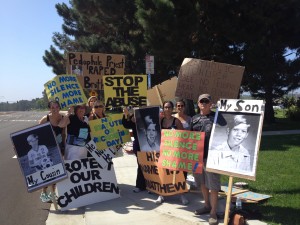 Last week, family members of Matthew Carrigan gathered outside of Corpus Christi Parish in Aliso Viejo to warn parishioners about Fr. Tim Ramaekers. According to a lawsuit filed by Carrigan, Ramaekers allegedly molested Carrigan when he was a young student at St. Justin Martyr Parish and School in Anaheim

And that’s where the problem starts.

When Ramaekers spoke at the Saturday and Sunday masses, he continually referred to “false allegations.” He kept mum about the lawsuit, even though the suit itself is in jeopardy. Because of the recent California Supreme Court decision in the Quarry case, it could be dismissed on the statute of limitations, NOT because of the merits of the case. Ramaekers said nothing about that.

The Diocese and Ramaekers also said that the Diocese did a complete investigation on the allegations. To date, they have not publicly disclosed the findings. What we do know is that the investigator had no access to Ramaekers’ secret personnel file, which is the sole property of the bishop and can only be released by a court order. We also know that a church-hired investigator has the same credibility as Enron hiring a private investigator (in fact, Arthur Anderson, Enron’s auditor, was criminally charged with shredding Enron documents).

Ramaekers also said that the Sexual Misconduct Oversight and Review Board (read more about it here) decided that the allegations were without merit. But similar boards in Kansas City, Philadelphia, San Fransisco, Orange (yes, Orange), and other places have either said publicly that information was withheld from them or that the bishop did not take their recommendations. In fact, the Archdiocese of Philadelphia hid allegations against 37 priests from its board. A Grand Jury had to sniff those out.

We also know that in the past, Orange diocese officials have not disclosed findings against priests like Michael Pecharich. Diocese officials told parishoners that Pecharich only had one allegation of a boundary violation. What they didn’t know was that he had been accused of child rape by four boys and that Brown and his people (in this case, John Urell) had known about the allegations since Brown became bishop in 1998 (and did nothing). Their “complete investigation” failed to disclose that.

What else do we know? Well, we know that Ramaekers worked at St. Justin Martyr alongside two notorious predators, Sigfried Widera and Robert Foley. Boise Bishop Michael Driscoll (then the chancellor of the Orange Diocese) sent Foley to England to escape prosecution. Widera was sent to Orange after being arrested for child sex abuse in Milwaukee. He went on to molest at least a dozen children at parishes in Orange County. He committed suicide while on the run from police.

We also know that Tod Brown mislead Catholics about 1997 allegations against him, when it could have been just as easy to say (just like he did with Ramaekers), “There was an investigation, and they found nothing.” But he decided to keep the allegation hidden, because it was easier.

We know that Brown has little respect for victims and the courts. In 2007, when former Chancellor Msgr. John Urell was summoned for a deposition in the Andrade/Mater Dei High School sex abuse case, Tod Brown sent Urell to Canada, defying the court and the law. Brown was charged with contempt, but the charges were dropped when the case was settled.

Diocese officials are also standing behind the “there is only one accuser” meme. I was the only accuser of my perp, but documents showed that he molested other girls as well. Did I mention that the diocese and my perpetrator denied my claims until the moment the documents were released?

None of this makes Ramaekers a predator. But how do we know it doesn’t, if we can’t trust the people giving us the information?

Simply put: The Diocese of Orange has a real credibility problem.

Ramaekers called the accusations his 9/11 moment. Unfortunately, the parishioners now have to sift through the rubble and debris in an attempt to find the truth. Hopefully, they won’t find any children.

8 thoughts on “The Troubling Case of Timothy Ramaekers”