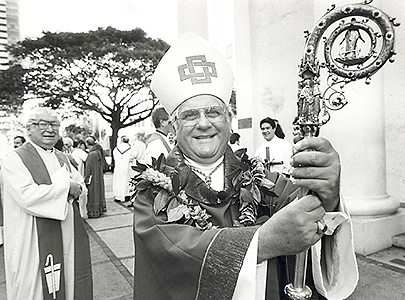 Of all of the abuse and cover-up that have been exposed as a result of Hawaii’s civil window for victims of sexual abuse, few things are as explosive as a report released yesterday that states the Vatican knew Hawaii’s former bishop was a sex predator before he was appointed ordinary.

The report, written by Fr. Thomas Doyle (who is also a personal friend), outlines how in 1981, he was tasked with investigating Ferrario for the Apostolic Delegation (now known as the Papal Nuncio).

He pulls no punches:

Shortly after the retirement [of Honolulu Bishop Scanlon] was announced, the papal nuncio began to receive letters from laypersons in Honolulu all of which were urging the Holy See not to appoint Ferrario.

The papal nuncio, Archbishop Pio Laghi also received a letter from the father of a young boy who claimed he had been sexually abused by Bishop Ferrario at the seminary. This letter, combined with the large volume of other communications, prompted Archbishop Laghi to do something.

He communicated with the Holy See and informed them about the accusations. He was instructed to conduct a confidential investigation and to appoint the retired bishop, Bishop Scanlan, to carry this out. Scanlan was sent a letter with the instructions from the Holy See. He was instructed to contact the father and his son and to meet with them. He was told the entire matter was to be carried out in absolute secrecy and that the man and his son were to be sworn to secrecy before they were interviewed.

He met with them at a restaurant and questioned them, especially the young boy, using language that was both elusive and intimidating. They were reminded that it would seriously sinful if they gave inaccurate information. In spite of the intimidation the young man stuck to his story of having been sexually abused by Ferrario. The bishop recorded it all in writing but added that he did not think it was totally true and that the boy may have been misinterpreting Bishop Ferrario’s actions. He based this opinion only on his subjective reactions to the entire matter.

The Vatican was informed that there were serious allegations against Ferrario, not only of homosexual behavior with age-appropriate men, but also with under aged boys. What the officials in the Vatican actually believed is not known. However they chose to ignore the warnings and appointed Ferrario as bishop.

Doyle also discusses the case of David Figueroa, who was sexually abused by Ferrario in the 1970s:

In 1975 the future bishop engaged David, then 15 years old, in a pattern of sexual assault and abuse that would carry on until David was 21.

David’s mother found out about the sexual abuse in 1979. In 1985 she wrote to the papal nuncio (Archbishop, later Cardinal Pio Laghi) and described the sexual abuse of her son. Laghi referred the matter to the Holy See and was instructed to carry out a secret investigation.

According to the report, the investigation was superficial and involved a limited meeting with David and his mother.

The results were sent to the Holy See. Ferrario was summoned to Rome to discuss the accusations and in 1987 the Holy See made a decision that was never publicized.

But the Vatican wasn’t content with a sham investigation. They had to shut down David, his mother, and blossoming rumors that Ferrario preyed on boys.

The Diocese of Honolulu issued a press release in 1989 which said that the rumors were false and that those involved were “associated with an ultra-conservative religious group in Hawaii who claim to be Catholic but who, in reality, are at odds with the Catholic teaching and authority.” The statement also said that “Archbishop Giovanni Re, Secretary of the Vatican Congregation of Bishops which investigated the charges and dismissed them in 1987, said “there did not turn out to be anything against the bishop. For us the accusations were baseless.”

The report also talks about other Ferrario victims and how they were treated by the Diocese of Honolulu and representatives of the Vatican.

At least five victims of Bishop Ferrario have come forward under the civil window.

And the Vatican knew from the beginning.

1 thought on “Report: Vatican knew bishop was a predator”