The response from Dolan? Cue the crickets. But that doesn’t mean that Dolan’s apologists have also clammed up. In fact, they have been very loud in defending Dolan, saying, “Well, at least he got rid of these bad apples.” If you want to read those articles, you can look them up. I really don’t want to drive traffic to them via my links.

I am not going to rehash the same news you can find on a million other websites. I am also not going to restate the 9,000 fine points of the public safety hazard Dolan caused. Every point is painfully obvious to anyone with a soul. Instead, this post is about why the apologists are dead wrong.

1) This ain’t the Wizard of Oz, sister. So quit trying to divert my attention. 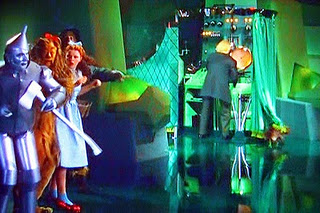 The Catholic League, Archbishop Charles Chaput and others always like to say, “There’s nothing to see here. Abuse is way worse in public schools. It’s a liberal conspiracy.” Here are my responses: Yes there is; Maybe; and Hell, no.

Lady Justice carries a sword and scales. Do you know why?  So that she may not remove the blindfold from her eyes. Justice must remain blind, whether you wear the clerical collar or are a federal politician. What murderer could stand before the court and say, “Gee, maybe I killed one person, but look at Hitler. He killed millions.” It’s a ridiculous argument and should be viewed as such.

I am going to give the apologists the same answer that my father gave me every day of my life until I moved out for good: “I don’t care what ‘everyone else’ is doing. You need to obey MY rules.” Dolan was WRONG. He BROKE THE LAW by not reporting abuse. He covered up for abusers. He must be held accountable. Period.

2) If it’s okay to pay predator priests $20K, why didn’t you pay good and honorable priests the same amount when they choose to leave the priesthood?

I know a number of former priests (and have talked to a couple before writing this. I encourage others to comment or contact me). I do not know a single good, honorable priest who was given a dime when they left the priesthood. A friend of my father’s and former LA priest Terrence Halloran (who reached out to me and has been an amazing and honest source of information and support), left the priesthood in 1967 because he fell in love. When I asked him, he said, “I didn’t even get paid for November 1967, my last full month in ministry.” He was also handed a bill (eventually forgiven by the Archdiocese of LA) for his education.

Patrick Wall, a former priest and my friend and colleage (and according to the Official Catholic Directory 1994-1996 a judge/advocate for the Tribunal for the Archdiocese of Minneapolis/St. Paul – you can look it up. In fact, I INVITE you to, because it will be subject of a later post) was also handed a bill for his education when he left the priesthood. It was huge and it was never forgiven. He didn’t say that he was leaving to become an advocate for victims. He didn’t molest kids. He was just sick and tired of covering up for child molesters. His first job outside of the priesthood was as a nurses aide in a rest home. Now, the church is trying to say that he was never a judge/advocate. But the OCD never lies.

These two good and honorable men were forced to enter the secular world with no savings, no support, no slush fund, no “wink and nod,” no annuity. So quit telling me that Dolan did the right thing by paying predators off to go away.  Twice-convicted child predator Oliver O’Grady is set for life, so why did Patrick Wall have to empty bedpans to eat?

3) This has nothing to do with politics

Yes, the bishops are suing the Obama administration regarding the Affordable Health Care Act. That is their right and duty under the Constitution. And yes, many liberal voices have spoken out for victims against the cover-up of abuse … but so have conservatives. So let’s cut to the chase: Sex abuse and cover up are not about politics. I know victims who have been ardent supporters of the cause who worked in the George H.W. Bush administration, victims who are Republicans, Libertarians, unaffiliated voters, and conservative Catholics. Some of my own biggest supporters are the mega-conservative Catholics who attending Latin services. Don’t tell me that this is a liberal conspiracy. Just as many Republicans were sexually abused as Democrats. Yes, the leadership of SNAP leans to the liberal side. So what? My husband is a Republican. (And I love my husband much more than I love David Clohessy. Sorry, David.)

4) Predator public school teachers get paid off all of the time. Why aren’t you going after them?

Yes, predator public school teachers get paid off all of the time. And I hate it, so I fight against it every time I can. But the public sector doesn’t use God, moral authority, eternal damnation or excommunication via lynch mod to hide abuse. The Catholic Church must be held to the same “higher standard” that that they demand of their faithful. Especially when they use tax dollars.

That being said, the public sector MUST be held to account. That requires money, political power, influence and connections. It means fighting unions and the status quo. Heck, the U.S. Catholic Church itself doesn’t have the money to expose sex abuse in governmental organizations. It’s a grassroots movement in its infancy. But the real change will have to come from the inside with victims coming forward and demanding justice …just like the real change in exposing sex abuse in the Catholic Church came from victims and Catholics.