The bill give victims of child sexual abuse a one-year window to come forward and use the civil court system to get justice and accountability. It is also a huge step forward for ALL victims of abuse—the more we expose abuse in private institutions, the easier it will be to pass legislation that eliminates sovereign immunity (the legal barrier to suing public institutions for crimes like child sexual abuse).

The bill now goes back to the Senate for a final floor vote.

Remember – we would know little to nothing about the criminal activity of men like Cardinal Roger Mahony were it not for the 2003 window. Statewide, more than 250 predators—dozens in Orange County—were exposed (with supporting documents and evidence to go with it!). Men like Denis Lyons and Michael Baker would never have seen a day behind bars, and and the crimes at places like Mater Dei High School would never have been exposed. 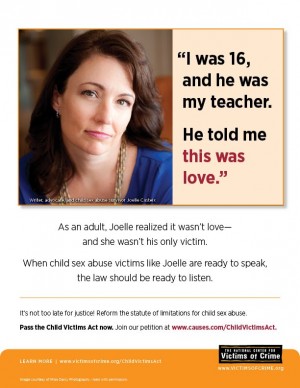