The lawsuit (posted here) charges that Fr. Gerald Funcheon sexually abused a 13-year-old boy at Damien Memorial School in 1983/1984 during an overnight retreat on the eastern shore of Oahu. Considering Funcheon’s history (you can read some of the documents here), we can only assume that there may be more victims in Hawaii who are suffering.

Besides exposing predators and keeping kids safe, the beauty of the anti-crime civil window is that the responsible parties are forced to be accountable for the harm they did to child victims and take some of the financial burden for victims’ care off of state coffers and taxpayers. The civil window provides an opportunity put that burden back onto the abusers and enablers, where it belongs.

Similar laws in California and Delaware have exposed hundreds of predators and helped law enforcement put child molesters behind bars.

Funcheon has also been accused of sexual abuse by two former students at Salinas’ Palma School, Chris Spedden and Steven Cantrell. Cantrell, a Monterey-area doctor, wrote an open letter to Palma and the community about the importance of coming forward and reporting sexual abuse. Both Spedden and Cantrell came forward as a part of the Irish Christian Brothers’ bankruptcy. The Brothers run Damien and Palma, as well as other schools across the United States

Spedden, Cantrell and the victim in Hawaii are heroes.  Were it not for them, Hawaii and California would never have known about the predator dumped in their schools.

Every once in a while, the stars align.

Last year, I was contacted by family members of a child sex abuse victim. They asked me if I had any information about a priest named Gerald Funcheon who worked at Damien Memorial High School in Honolulu. I had never heard of Funcheon, but a quick search showed that he had a nasty past. 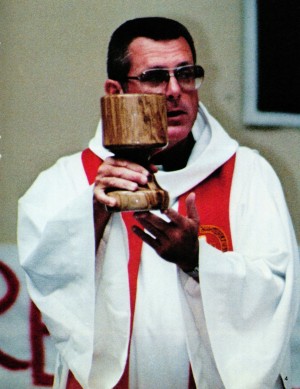 Not only was the Crosier priest banned from the Diocese of Indianapolis, but there were numerous sex abuse lawsuits against him from his time in the midwest. And then Funcheon vanishes: he disappeared from the Official Catholic Directory in the early 1980s. There is really only one reason why a living priest would vanish from the Official Directory. He was probably in hiding.

I told the family that I couldn’t find any information about Funcheon in Hawaii, but to keep in touch.

When a religious order or diocese declares bankruptcy because of child sex abuse, the court will order a “bar date,” that is, a deadline for ALL victims to come forward and use the bankruptcy court to “out” their perpetrator and file a claim. This is a good thing and a bad thing.

It’s good because it opens a window for victims who couldn’t come forward before because their statutes of limitations had run out. It allows potentially hundreds of victims to use the court system to get justice and do what they can to ensure that what happened to them doesn’t happen to another child.

It’s bad because the window is only open for a very short period of time. After the deadline, many victims lose the ability to use the civil justice system forever.

In the case of the Irish Christian Brothers, getting the word out is tough.  They run or ran dozens of schools across the United States. Many well known perpetrators (like Thomas Ford, who was convicted of beating abandoned children, and Robert Brouillette, who was convicted of child pornography after being arrested in a police sting for attempting to meet a child he had lured on the internet) worked in seven or eight of the schools. Many of the brothers sailed under the radar and were never listed in diocese directories.

I decided to go to Honolulu (I know, it was a tough decision) and do a press event to garner attention about the bankruptcy. While many alumni at the school were scheduled to receive letters telling them that they may have rights, I knew that there was going to be no publicity about perpetrators that worked at the school.

I got copies of the Damien yearbooks from the Honolulu public library (because of a super-dooper friend who shall remain nameless) and we started comparing faculty to known, admitted, or convicted predators. And guess who we found? Thomas Ford and Robert Brouillette (our two arrested and convicted Christian Brothers) and … Gerald Funcheon. He worked at the school for two years (1983-1985), right after he escaped allegations of abuse in Florida, Indiana and Minnesota.

We got all three men in the news.

Not only did we find Funcheon in the Damien yearbooks, but we also found him in Palma School yearbooks. Palma, which is a Catholic all-boys school in Salinas, CA, was where Funcheon was “dumped” in 1984 after parents in Hawaii complained that Funcheon was possibly molesting kids. Two victims from Funcheon’s time in Palma have now come forward.

I kept in touch with the family in Hawaii. They now know that their son has legal rights. They also have photographic evidence that Funcheon worked at Damien.