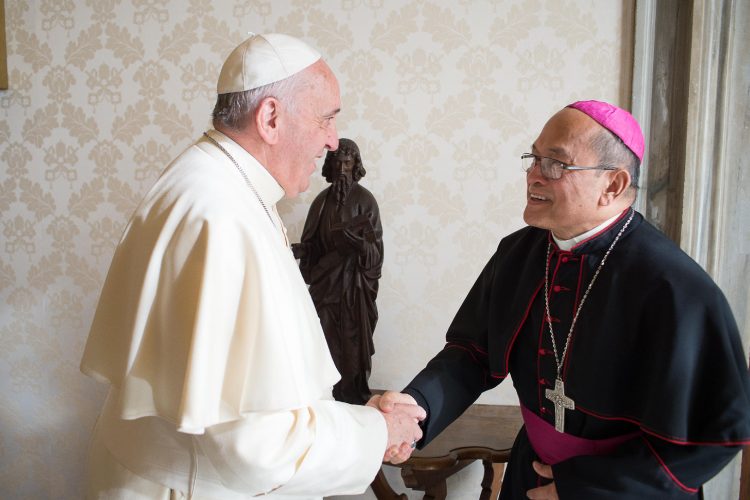 There is a huge chance that the history of the Catholic Church on Guam will be rewritten … by Catholics. And it’s pretty awesome.

All it will take is a small change in the law that will give victims of sexual abuse the opportunity to use the civil courts to expose their abusers and the men and women who covered up the abuse.

From the Pacific Daily News:

Gov. Eddie Calvo is weighing the concerns of the Catholic church and the community as he decides what to do with a bill that would allow victims of child sexual abuse to sue their abusers, according to the governor’s office.

Today is the governor’s last day to sign or veto Bill 326-33, or the bill lapses into law without his signature. Senators on Sept. 12 approved the bill 13-0. If it becomes law, it could make the Catholic church on Guam open to lawsuits by those who, in recent months, have publicly accused priests of raping or molesting them.

In the past few days, Archbishop Savio Tai Fai Hon, the current apostolic administrator of the Catholic archdiocese, has collected signatures and spoken out against the bill. He says (like many of his brother bishops) that the bill will force them to close churches and end many needed services on the island.

Nothing could be further from the truth.

The real fear is that this bill, if made law, will expose DOZENS of sex-abusing clerics on Guam. Worse (for him) still, victims will have the opportunity to find out WHAT church officials knew and WHEN they knew it.

The law will also most likely expose clerics who molested kids and are STILL WORKING IN CHURCHES. Priests like Archbishop Anthony Apuron, who *ahem* is still the Archbishop. (Note: The Vatican has done NOTHING to help Guam’s victims, properly punish Apuron, or end abuse. NOTHING.)

Since Apuron has now been accused of sexual abuse numerous times, Hon’s real problem isn’t money. His real problem is the exposure of an archdiocese that knew about abuse and abusers for DECADES.

Instead of calling the police, archdiocese officials silenced victims, promoted abusers, and conned every single Catholic on the island into believing that their churches were safe.

Catholics want the bill signed. In fact, Guam’s Catholics have been the driving force behind helping victims, exposing Apuron, and finding justice.

3 thoughts on “Why is Hon so scared?”