One of the most important things I teach parents about empowering children against abuse is: “no secrets.”

Yesterday I was reminded about how important it is to REINFORCE this lesson as children get older. Although the following story does not involve abuse, it shows how easy it is for a child to keep a secret with a “trusted adult” … even if the adult is wrong or should not be trusted. 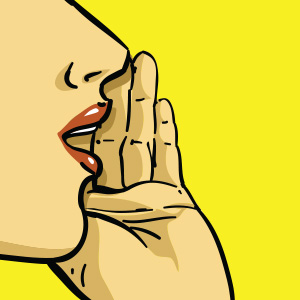 Family X is a local family who has a daughter with a chronic illness. If Daughter X is exposed to sick kids, her likelihood of infection is exponentially higher than other children’s. If infected, a simple cold or flu could kill her. A vomiting illness could land Daughter X in the hospital. The result? Family X is vigilant. Daughter X wears a mask in public, and they ask people whom they encounter to let them know if they or their children are sick.

Last weekend, Family X had a small family gathering to celebrate an important milestone. At the party, Cousin X began throwing up in the bathroom. Family X’s 11-year-old son, who is not ill, was there. When Aunt X found out, she told Son X, “Please don’t tell anyone, especially your mother. I don’t want to ruin the party.”

So, not wanting to disobey or upset his beloved aunt, Son X kept quiet. Until he began vomiting the next day.

When Mother X was taking care of the-now-terribly-ill Son X, she asked him, “Did you know of anyone who was sick?”

Barfing and needing his mother’s care, Son X told her the secret.

Mother X was rightfully upset. Now, Son X was suffering and Daughter X was at severe risk. Had the aunt simply told Son X to wash his hands and tell his mother about the situation, Family X could have taken the necessary precautions, including making sure that all surfaces were clean and the sick cousin was quarantined (which should have happened anyway). But Aunt X decided to make that call and swear a child to secrecy. Now, everyone was at risk.

But what was also upsetting was the ease with which Son X kept his aunt’s secret. Although Son X is a child, he knew that by keeping the secret, there was a huge risk. But he loves and trusts his aunt. He truly believes that such an aunt would never do anything to put him or Family X in harm’s way.

See where I am going here?

This is why children usually don’t report sexual abuse.

Because the abuser is a loved and trusted adult—whether a family member, scout leader, minister, neighbor, or camp counselor—he or she can easily tell the child, “Don’t tell anyone.” And the child will obey. The more loved and trusted the adult is, the more likely the child is to keep the secret. And if a child has been groomed over a period of weeks or months, he or she is even less likely to tell.

— Reinforce the “no secrets” rule (make sure to differentiate between “secrets” and “surprises.” Secrets are never told. Surprises are things like parties and presents).

— Give your child a situation and ask the what he or she would do. For example, you could say, “What if Mrs. Cooper showed you something and made you promise to never tell. What would you do?” Depending on the child’s answer, you can say that he or she should never keep an adult’s secret.

You can go on and say that adults should never have secrets with kids. Always tell mom/dad anytime an adult—no matter how much the child loves the adult—wants to have a special secret. Even if it’s something as simple as a extra snack. Or a barfing cousin.

Don’t wait until it’s too late.

Kids sharing secrets amongst themselves is an issue for a later post.