I have never had any kind of tolerance for institutional malfeasance. Shocker, I know. But what really intrigues me is this: Why are the vast majority of America’s Catholic priests silent when it comes to child sex abuse and cover-up in the church? 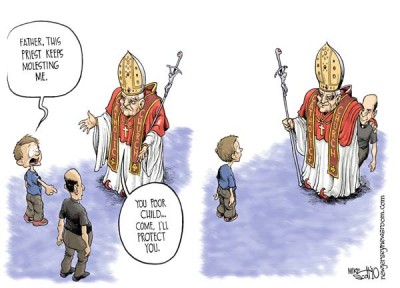 In Orange County, documents released in 2005 showed much of the same thing … except we are still MISSING the files of many of OC’s biggest perpetrators (Michael Harris, anyone?). Then there is the fact that the man who personally engineered the cover-up of abuse and protection of predators, Msgr. John Urell, has never been punished and sits in a swanky south county parish. No shame, no remorse, no accountability.

In Kansas City-St. Joseph, a man convicted of child endangerment is the bishop. ‘Nuff said.

In Newark, Archbishop Myers has been mired in scandal, blaming a “slipshod filing system” for abusers kept in ministry in Illinois. (He also—a la Sheriff of Nottingham—had no problem accepting gifts of coins and gold from priests, even accepting one priest’s beloved camera). Myers also said that putting a convicted sex offender back in ministry was “an appropriate decision at the time.” The offender, Michael Fugee, was convicted of sexual misconduct in 2003. A spokesman for Archbishop Myers said in April of this year, “Father Fugee remains a priest who is allowed to be in ministry. There is no change in his status at this point.” Fugee has since been removed, and the New Jersey Star Ledger has even called for Myers’ removal.

And from the priests? Silence.

Why aren’t the priests in Kansas City up in arms that their boss is CONVICTED of shielding child pornography? Is it fear? Is it shame? Is it obedience?

I think another part of the problem is NIMBY-ism. Priests in areas not mired in scandal say, “Well, those kinds of things don’t happen here.” Or, in the case of Orange County and Los Angeles, they say, “It happened a long time ago. Times were different then.”

There are two problems with that argument. The first is obvious: Child sex abuse, the cover-up of abuse, and shielding predators have been wrong for generations (lots of generations).

The second problem is the one that priests seem to forget: They have no say who their new boss is going to be. What happens if suddenly, a man like Archbishop Myers, Cardinal Mahony, John Urell, St. Paul Archbishop Nienstedt, Kansas City Bishop Robert Finn, OC Bishop Kevin Vann (who refuses to remove John Urell), or another problematic cleric becomes the LOCAL bishop. Now what?

Suddenly, the problem IS in the priest’s backyard. And because he refused to speak out when it was safer, he certainly cannot speak out now that a problematic bishop is his local prelate.

I don’t think Jesus would sit silently in his parish. In case you have forgotten, Jesus was the champion of social justice and rebellious change.

No! Your calling was to celebrate your faith, fight for the underdog, bring people to God, and rid the world of sin.

If you care about your faith, then it is time for you to stand up. If you care about victims, it is time for you to demand change. How do you do that? It’s easy: say so and do it publicly. Do it at the pulpit and record it. Write a letter and post it on the internet. Post a comment here and on every news story that talks about church child sex crimes and cover-up. Don’t let fear of losing your job or your pension hold you back.

You vowed to be like Jesus. Now it’s your time. Victims are depending on you.

9 thoughts on “A challenge for the good priests”