From my SNAP statement:

Today, the Diocese of Orange has announced the retirement of Orange County, California Bishop Tod D. Brown. We will learn the name of his successor tomorrow. 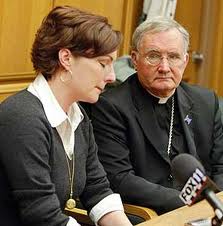 Simply put: we are grateful to see him go. Why? The facts of his tenure are shocking for victims of abuse, Catholics and the Orange County community.

For more than ten years, Brown cultivated an environment that fostered and rewarded the cover-up of clergy abuse. Need some examples? Since he became Bishop of Orange, he:

— Sent his former highest ranking priest out of the country to avoid a sex abuse and cover-up deposition and then faced criminal contempt of court charges,

— Used an over-priced PR stunt to announce “reforms” in his diocese – reforms that he never took seriously,

— Kept numerous priests in ministry who had been accused of abuse, and then removed them in events that deceived parishioners and shamed victims about the true nature of the abuse,

— Currently keeps an accused priest in ministry, even transferring him to a wealthy south county parish without giving complete information to parishioners, and

— Broke his own rules of transparency and remained silent about sexual abuse allegations against him secret – saying that he was ashamed – years after he and his fellow bishops promised transparency and honesty.

It’s important to note that Brown’s cover-up of child sex crimes was no solo operation. We suspect that current and former diocesan and parish staff may have ignored, concealed and enabled child sex crimes. This is important to note: Brown’s departure doesn’t automatically usher in some new, magically safer era for children. The culture and climate and patterns of reckless and secrecy surrounding child sex crimes in the church are deeply rooted and long standing. They won’t be suddenly erased by one man’s departure.

In order to help heal the wounds caused by Bishop Brown, his successor should take steps to remove other church officials, such as Msgr. John Urell, who have helped perpetuate these cover-ups. He should also remove priests with open allegations of abuse against them, such as Fr. Timothy Raemaekers, and go through all the diocesan personnel files and turn over all evidence of abuse to secular authorities.

This will be the new bishop’s first test of leadership in Orange County – will he depart from the dangerous secrecy of his predecessor or will he continue that pernicious trend? We hope that it will be the former.