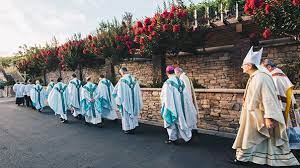 It was inevitable. And there is SO MUCH to unpack.

In a statement last week, Diocese of Santa Rosa Bishop Robert Vasa said that the northern California Catholic Diocese plans to declare bankruptcy due to “more than 130 child sex abuse lawsuits” filed since the opening of AB 218, the one-year window for survivors. (I had the honor of being the survivor to testify on behalf of that bill in 2019.)

The Santa Rosa bankruptcy filing is no surprise. It’s a tried-and-true dirty tactic used to HALT pending sex abuse cases in their tracks, avoid very embarrassing public civil child sex abuse and cover up trials, and hide evidence of sex abuse and cover-up away from the public, parents, and Catholics.

And Santa Rosa has a lot to hide: There’s everyone favorite bishop, G. Patrick Ziemann. Accused of abusing kids throughout his career (a career that included three years of teaching at Mater Dei High School … barf), he was elevated to bishop and assigned to Santa Rosa. There, it’s alleged he continued the abuse of kids and young men, and even allegedly had a “sex slave” (there’s a book about it).

The Diocese of Santa Rosa is also home of the Napa Institute. (For those of you in the know, this is where former St. Paul-Minneapolis Bishop John C. Nienstedt hid out after his diocese was criminally and civilly charged with covering up child sex abuse. Nienstedt has also been personally accused of abuse.)

But I digress … the Napa-area retreat/education center was founded by lawyer Tim Busch, who … ironically … is also the mastermind behind the “foundation model” of diocese finances. That nifty little model is the whole reason we can expect most, if not all, of the Catholic dioceses to declare bankruptcy.

The foundation model, put in place in light of the 2003 California civil window for survivors, placed individual California dioceses’ finances into nonprofit “diocese Catholic foundations.” Money, real estate, and other assets in the foundations are reportedly “protected” from survivors of child sexual abuse seeking damages.

These foundations also allow bishops to say that their dioceses are effectively “broke” (because they have “no money” … it’s all in the “foundation”) and make the process of declaring bankruptcy (almost) seamless.

Filing Santa Rosa’s bankruptcy first is an excellent trial balloon for the California Catholic Conference. The wine-country diocese is small, not very wealthy, and their bishop, Robert Vasa, is not terribly high profile. This is the kind of news that can “sneak in” without much notice. If a larger diocese, say Los Angeles or Orange, tried to file first, the news would make international headlines. (and what would OC Bishop Vann do with his beloved Christ Cathedral and its organ, Hazel?).

(As a note, the Diocese of Stockton declared bankruptcy in 2014 in light of a slew of child sex abuse lawsuits. As a result, they have escaped this current civil window relatively unscathed).

So, I’ll keep following this story and posting here. It will only get nastier before it gets better.