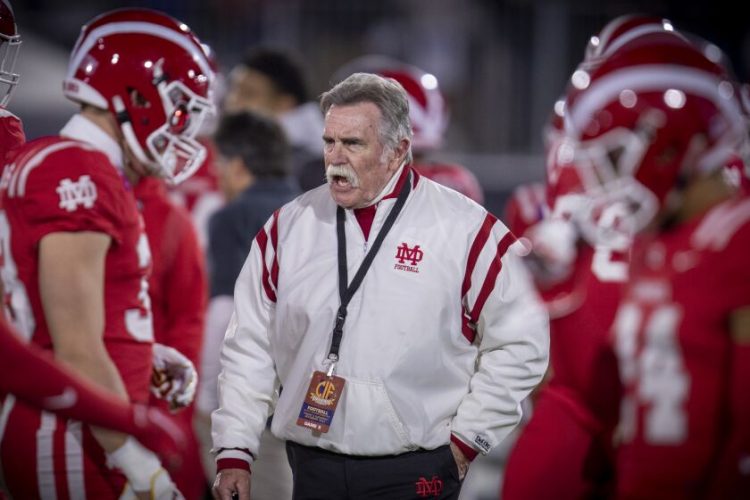 So, Santa Ana’s Mater Dei High School has a bit of a problem. (Okay, they have a lot of problems, but I’m just focusing on one here, so bear with me.)

Coach Bruce Rollinson has changed course and decided that he WILL step down as head coach of Mater Dei at the end of this year.

Their last big game against St. John Bosco? You know, the one that many waxed poetic about …. “Rollinson coaching his last game at the Rose Bowl where he played his finest game for USC under John McKay … blah blah blah …”

I know that schadenfreude is very impolite. But at times, it’s a very nice feeling.

But I digress … So, last year, then-Mater Dei President Fr. Walter Jenkins (whom I believe will turn out to be a big hero in this saga) ordered an independent investigation (which is now called an assessment) into Mater Dei’s hazing problem.

The result? Rollinson is being forced out before parents, students and the general public get a gander at it. He will get his going away parties, his awards, his accolades, his bonuses, his NDA.

And then, we will get a hint at the truth.

Smacks of our pal Joe Paterno, don’t you think?

I am still flummoxed when parents send their kids to that school. Or when people get upset with me about criticizing it. Mater Dei High School simply a bunch of buildings run by a cadre of petty and corrupt men and women who care more about veneer than that safety of kids.

How many more kids need to be beat up before they do the right thing? So just pony up the assessment, Mater Dei.