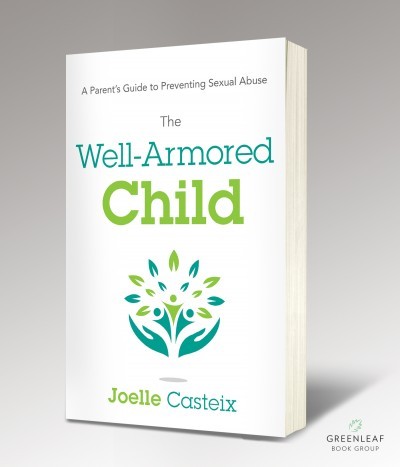 The Gallup Independent does not have an online edition. The entire article is posted here.

GALLUP — As an advocate for victims of sexual abuse, Joelle Casteix has used her own experience to help support other survivors.

Casteix was sexually molested as a teenager by one of her high school teachers. Although she has worked as a journalist, educator and public relations professional, that devastating experience as a teen eventually led Casteix to become the volunteer Western Regional director of the Survivors Network of those Abused by Priests. Despite the word “priest” in the title, the organization offers support to abuse victims from all backgrounds and denominations.

In recent years, Casteix, who lives in California, has widened the scope of her efforts to also educate parents and communities about abuse-prevention strategies. As a result, she recently published the book “The Well-Armored Child/A Parent’s Guide to Preventing Sexual Abuse.”

Q: Why was it important to you to write this book?

A: I have been a survivor/ advocate for almost 15 years, working with victims of child sexual abuse from all over the world. But no matter where the survivor was from, every victim’s story was strikingly similar to that of other victims, and my own.

I realized that the vast majority could have been saved from abuse — or become a “hard target” — if the victim’s parents and community members had learned a few simple tools. The problem is that no one tells parents what those tools are.

Q: What are some of the warning signs that a child is being sexually abused?

A: Is an adult spending too much time with your child and/or showering your child with attention? Have you noticed behavioral changes in your child, including secrecy, changes in peer group, secret social media and email accounts, gifts that your child cannot or will not explain (including technology, gift cards, pornography and other expensive items)? Has your child recently quit a favorite sport or hobby for no apparent reason? Is your child suddenly ashamed or embarrassed about his or her body? Is he or she skipping class? Are you seeing overly sexualized behavior or language in your child?

Older teenagers who have been sexually abused can and do show more aggressive “acting out,” including drug and alcohol use, anger and aggression. Girls tend to act more “inward,” and instead show signs of shame, depression, cutting (or other self-destructive behaviors), isolation and fear. Always address any noticeable changes in behavior and open up lines of communication with your child.

Q: Explain what “grooming” is, and list some of the common grooming tactics of predators.

A: Predatory grooming is how an adult targets and creates a “compliant” victim, that is, a victim who is too scared and manipulated to understand and/or report the sexual abuse. Predators use attention, flattery, gifts (including technology, drugs, alcohol, money, food and toys) and secrets to isolate the child from peers, make the child feel special, blur sexual boundaries, and convince the child that the abuse is love. It’s a long process of subtle manipulation that can take weeks to months. The goals? Gain access to a child, build trust and make him or herself the center of the child’s world … in order to sexually abuse the child.

Grooming is a main reason why many victims can take decades to report. Because the child was so carefully manipulated, the child believes he or she did something to “ask for” or “deserve” the abuse. The child believes the abuse was his or her fault. What’s even more tragic is that a carefully groomed child will often love and respect their abuser, even though the child knows the abuse is wrong.

Q: Are there typical red flag behaviors that predators tend to exhibit?

A: Not really. Predators are cunning. They are not the “strangers in trench coats” and do not follow stereotypes. They can be men, women and even other children. That’s why it’s important you empower your child with strong body boundaries, the proper biological language to describe his or her body, and make your rules and boundaries clear to others when it comes to your child. A predator is far less likely to target a child who knows the proper names for body parts, has a good relationship with his or her parents, and who has parents who will not allow the predator to spend inappropriate unsupervised time one-on-one with a child.

Q: How common is the sexual abuse of children by other kids or older teens?

A: Recent statistics from the Office of Victims of Crime state that approximately 25 percent of child sexual abuse is perpetrated by another child. The reason this type of abuse proliferates is twofold. First, adults tend to shrug off the behavior as “child’s play” or “boys will be boys.” The second reason is the idea that a child could sexually abuse another child is abhorrent: We don’t want to think about it. Fortunately, our society has taken a strong stance on bullying — encouraging children to report, not be a bystander, and stand up to aggressive children. Because of that, child-on-child sexual abuse is now reported more often by children, who see it as a violent form of bullying.

If your child says he or she has seen this kind of abuse or has been sexually abused by another child, report to law enforcement immediately. Both the victim and the abusive child need immediate help and intervention. It is a serious crime.

Q: What should parents know about children’s use of the Internet and social media?

A: Predators can groom children just as easily over the Internet as they can in person — and this kind of grooming is preventable. Monitor all Internet-enabled devices in your home.

If you get pushback from your child, remember: It is your name on the contract for Internet service. Therefore, your child should have no expectation of privacy on the Internet. Make sure all Internet-capable devices (phones, tablets, gaming consoles) are only kept and used in common areas of the home and never behind closed doors. Make a “no cellphones in bathrooms” rule. Ensure your children understand and communicate to peers and adults that you monitor everything — this not only cuts down on cyber bullying, but puts predators on notice.

Q: What can parents do to protect their children from being vulnerable to sexual abuse?

A: There are three things: Communicate openly with your child, help your child cultivate strong body boundaries and authentic self-esteem, and monitor Internet-enabled technology.

Q: If a reader has experienced sexual abuse, what message would you share with him or her?

A: Acknowledge the abuse, talk about it and get help. You are not alone and the abuse was not your fault. There are wonderful healing resources available for men and women of all ages who were sexually abused as children and/or sexually assaulted as an adult. You can regain your power, your dignity and your voice. And by speaking out, getting help and healing, you can help break the cycle.

Q: How much is your book, and where can readers purchase it?

A: The book is $12.95 for the paperback and $3.99 for the ebook (Kindle/Nook). It can be purchased directly through Amazon or Barnes and Noble.