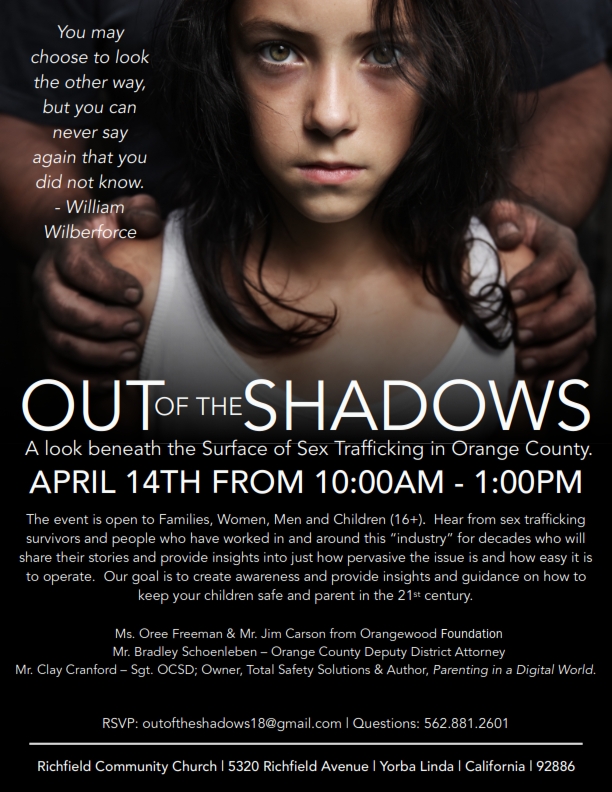 My son is eleven years old. He likes to play basketball.

Oree Freeman was eleven when she was sex trafficked on the streets of LA and Orange County.

Men bought her for sex across the street from Disneyland. Bought her through websites like Backpage or via text. They knew full well that she hadn’t hit puberty. That’s why she went for a higher price. She had a quota to meet every night to pay her pimp. He told her what to wear. What to eat. What to say. When to sleep.

Oree didn’t want this life. She wanted to be a veterinarian. No eleven-year-old wants to be sold for sex.

When Oree came to talk to my class at UCI, all I could see was my son. If he ended up in the wrong hands, what could protect him from this life?

Oree is one of the lucky ones. She escaped the life at 15. Now, at 23, she educates everyone from law enforcement to legislators to the public about the children—our children: runaways, throwaways, lost and alone kids—who are bought and sold on the streets of Orange County.

Child sex trafficking in Orange County is a real problem that law enforcement, social services, nonprofits, faith groups, and advocates like Oree are dealing with head-on. But they can’t do it alone. The key is awareness.

Join us on April 14. Hear Oree for yourself.

1 thought on “Eleven-year-olds are sold for sex in Orange County. Help us stop it.”