I hate watching sports … but I LOVE stories about sports.

The minutiae about how any particular game is played is usually lost on me. For me, going to a live sporting event is about the spectacle, not the stats or the rules.

But give me a documentary, movie, book, magazine article, or TV show about the PEOPLE in and behind the games, and I’m mesmerized. These stories draw me in because they are about ordinary people who do extraordinary things. These stories take place in a world—our world—where ANYTHING is possible. There are no victims and there is no pity. This is a world full of vision, enthusiasm, dreams, hope, love, and the value of tenacity.

Which brings me to a small island in the Western Pacific: Guam—an island full of ordinary people doing very extraordinary things. These people aren’t athletes—they are Catholics fighting to take back their church, their faith, and their reputations. 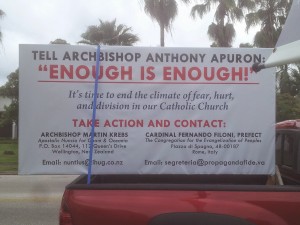 I went to Guam in 2010. Survivors on the island had asked me to come there and reach out to other survivors who felt like it was not safe to come forward and report. The Archbishop of Hagatna, Anthony Sablan Apuron—according to Catholics and critics—was perceived as a bully who scared and shamed victims into silence. So, for some sex abuse victims in the Archdiocese of Hagatna (the only diocese on Guam), coming forward and reporting abuse was tantamount to career and reputation suicide. For the rest, it was suicide.

So when Guam legislators passed a 2011 civil window that allowed sex abuse victims to come forward and use the civil courts to sue their abuser (but not the Archdiocese), victims didn’t come forward … it was just too risky.

Fast forward to 2014. This is where the story really begins. (Note: this story is SO complex and complicated, I know I’m going to miss some of the big points. But the story is still pretty darned juicy.)

Local Catholics, led by trail blazers such as Tim Rohr (a man Apuron had recruited to discredit me in 2010) and Fr. Matthew Blockley, decided that they had had enough. Apuron was pushing the Neocatechumenal Way, a lay movement within the church that according to John Allen, Jr., is “playing fast and loose with both Church teaching and the liturgical rules, fostering a cult of personality, and dividing parishes by insisting that members attend their own Saturday evening services rather than the usual Sunday Mass.” 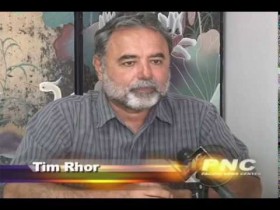 But there was more. According to Rohr, Apuron was punishing his critics by firing them and “cutting fast and loose” with their reputations. Even worse, the group found out that a member of Apuron’s inner circle, John Wadeson, was a twice-accused priest that had been banned from San Francisco and Los Angeles. Blockley and Rohr (who was now an ally) reached out to me and SNAP to help expose the priest. After the story went national, Apuron finally forced Wadeson to quit.

Rohr and Blockley weren’t done. They blasted Apuron for financial mismanagement. They demanded a voice in how the Archdiocese was run. They demanded to know why Apuron was pushing out his critics inside the chancery. Rohr empowered John Toves, a relative of an alleged sex abuse victim of Apuron himself, to come forward and publicly talk about what he knows. Rohr’s website was flooded with local supporters and international readers (many of whom were within the Vatican itself).

Other people started to stand up. A group of local Catholics started a nonprofit called Concerned Catholics of Guam. The group’s purpose is to empower the laity and to achieve financial transparency in the Archdiocese. Soon after, John Toves came to Guam to try and speak with the Archbishop. He was told he would be arrested if he came onto church property.

Then, Apuron fired Deacon Steve Martinez, the man who had demanded that Apuron’s handling of the Wadeson case be held up to Vatican scrutiny. Rohr and his supporters blasted the move, exposing the fact that Martinez was being ousted for upholding the sex abuse policies of the Archdiocese—policies that Apuron allegedly wanted to ignore.

The Guam Archbishop’s veneer of respectability had almost completely disintegrated.

Then came the coup de gras. Yesterday, December 19, the Vatican announced that the Archdiocese of Hagatna would be the subject of an “Apostolic Visit” during the first week of January 2015. Apuron did his best to spin the visit, but the real reason of any Apostolic Visit isn’t so happy: The visitor is sent to investigate a special circumstance in a diocese or country and to submit a report to the Holy See at the conclusion of the investigation.

As a result, a seemingly panicked Apuron has decided that Martinez could stay in his position until January 12, after the Apostolic Visitor had returned to the Vatican.

Catholics on Guam are fighting … and right now, they are winning. This is something that NEVER happens. Apuron has few, if any, vocal supporters and the Vatican has taken notice. Even if the Pope decides to take no action whatsoever (which is a huge possibility), Guam’s Catholics have already struck a huge victory. It’s a real Cinderella story (to borrow a well-worn sports cliche) and it’s still unfolding.

I suggest you keep this team on your radar. They are doing extraordinary things, and we should all be watching.

3 thoughts on “Guam: When ordinary people do extraordinary things”