One of the chapters of my upcoming book deals with what I call Institutional Rot, that is, why “good” people do and say bad things in the name of the institution and how children are caught in the crossfire. For an institutional culture to have this kind of crisis, the direction—or I should say, misdirection—has to come from the top.

For the sake of comparison, let’s look at a hypothetical:

Auto Company X is the leading automaker in the United States. For more than 100 years, Company X’s cars have been a part of American’s lives and a well-loved and trusted brand. But civil lawsuits filed by victims have unearthed the fact that Company X has knowingly been making and selling defective cars that veer off the road and kill people.

Hundreds of victims sue the company. In the process of the litigation, it’s discovered that many of the corporate officers knew about the defects and did nothing. Instead of being fired, the executives are allowed to keep their jobs.

The news gets worse and worse. In some areas of the country, anywhere from one in ten to one in 20 cars were killing people. While many of the cars were taken off the road, the company refuses to disclose how many cars still on the road have the potential to kill. In some cases, Company X took their emblems off of certain killer cars and now claims that they are no longer responsible for what those cars do.

Although the lawsuits continue and one executive was convicted, the company insists the crisis is over. The convicted executive, who covered up for the defects and allowed killer cars to stay on the road, keeps his cushy job.

In an interview, a newly-promoted president of the company says, “The crisis is over.” Despite the tens of thousands of people who were injured or killed by his cars, he says that “drunk drivers kill far more people than Company X’s cars.” He goes on to say that no one has looked into auto accidents more than Company X and that they are being “unfairly targeted.” In fact, he calls his predecessor, who knew about the defective cars for decades, a “true reformer.”

We’d never tolerate that from an auto company. Why do we tolerate it from a religious leader?

From the translated text:

Corriere della Serra: The scandals that rocked the life of the Church are fortunately in the past. A public appeal was made to you, on the delicate theme of the abuse of minors, published by (the Italian newspaper) Il Foglio and signed by Besancon and Scruton, among others, that you would raise your voice and make it heard against the fanaticisms and the bad conscience of the secularized world that hardly respects infancy.

Pope Francis: I want to say two things. The cases of abuses are terrible because they leave extremely deep wounds. Benedict XVI was very courageous and he cleared a path. The Church has done so much on this path. Perhaps more than anyone. The statistics on the phenomenon of the violence against children are shocking, but they also show clearly that the great majority of abuses take place in the family environment and around it. The Catholic Church is perhaps the only public institution to have acted with transparency and responsibility. No other has done more. And, the Church is the only one to be attacked.

Here’s the problem: Francis is not addressing the problem. In business ethics circles, this kind of response (or lack thereof) is called “Organizational Failure.” What’s organizational failure? It’s when, in a crisis, an organization’s leader does not take responsibility, does not show contrition, does not display true action to ensure it never happens again, and does nothing to rebuild trust or punish wrong-doers. 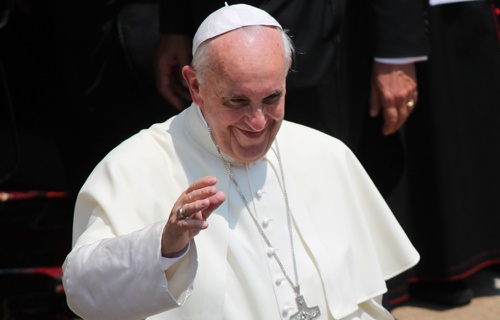 Instead, Francis says the problem is over, does not apologize, does not talk about Bishops who are law-breakers right now, does not try to make amends, deflects blame, and plays the victim. And unfortunately for many Catholics and apologists, that’s okay.

It should never be okay.

8 thoughts on “In crisis, Francis fails”