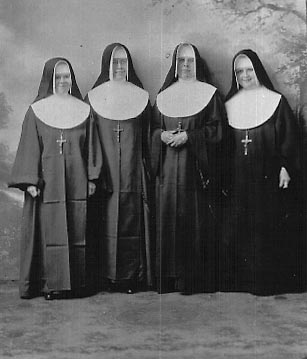 I am guilty of instantly running to the defense of American nuns after the Vatican announced that women religious in the United States had “a prevalence of certain radical feminist themes incompatible with the Catholic faith.” Like most people, I remembered American nuns working with the most dejected among us – helping the poor, the sick, the homeless, and the fringes of society … and my junior AP English teacher Sr. Lorraine, who was in way over her head.

But I had forgotten something: The leadership of American nuns in the United States is also no stranger to child sex abuse and cover up.

Since 2004, SNAP has been trying to get the Leadership Conference of Religious Women (LCRW) to make some kind of statement on behalf of children who were sexually abused by nuns. There are a number of SNAP members and leaders who were sexually abused by women religious, and many of them feel like their plight is ignored. Eight years later, SNAP has received no response. Victims have been simply shut out of the conversation.

This week, the LCRW is meeting in St. Louis where they will figure out how they will respond to the Vatican report.

Outside of the meeting, members of SNAP and victims of sex abuse by nuns will be holding a press conference, asking that the bishops “appointed to ‘supervise the overhaul’ of their organization” carefully evaluate the cover-up of sexual abuse by nuns and secret settlements with victims.

Even I was a little shocked by what I learned. According the SNAP press release:

This week, SNAP also learned that a St. Louis man, who charges that he was molested by a nun, secretly got a $16,000 settlement last year from the nun’s superiors. The alleged abuser was Sr. Gretchen, who groped the then-eight year old second grade boy’s penis at a North County parochial school around 1969-70. (SNAP will provide copies of the previously undisclosed, signed settlement agreement.)
Similarly, nuns settled a civil child sex abuse suit in Connecticut in 2005 involving Sister Linda Cusano, who taught at Cor Jesu from 1988 to 1990.
Catholic officials alerted no one to the two settlements. Nor did they reach out – anywhere – to anyone else who may have been hurt by the nuns. The cases prove SNAP’s view that even now, nun supervisors conceal child sex crimes by their employees. Such secrecy endangers kids, SNAP maintains.

I’ll post the lawsuit and other documents as soon as they are made available.
I can’t help but wonder: doesn’t social justice begin your own accountability to those you have hurt? Isn’t it easy—especially since the number of victims by nuns is smaller than that in the church as a whole—to embrace the victims, acknowledge wrongdoing and foster healing?

4 thoughts on “Another Disconnect: Nuns, Sex Abuse, and Vatican Investigations”