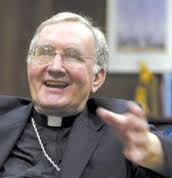 On a lark, I looked up the Wikipedia entry for Orange County Bishop Tod Brown.

I admit that I am guilty of using Wikipedia for references on my own blog posts. But after reading Brown’s entry, I’m going to have to rethink that practice.

His entry has been scrubbed so cleanly of the facts, that it shines as brightly as his new glass cathedral.

Too bad Brown can’t be just as transparent.

2 thoughts on “Wikipedia or PR? You be the judge”