Last week, the Vatican announced that Mother Teresa will be made a saint sometime in May 2016. 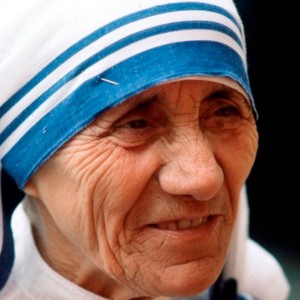 The Macedonian nun founded the Order of the Missionaries of Charity, a religious order whose mission is to help the poor.

When the sainthood announcement was made, critics denounced the decision, citing the fact that she sought health care in the US (while saying the poor “accept their suffering“), her alleged misappropriation of money, and the nun’s close relationships with violent dictators.

And then there’s the whole miracle thing, which I always find a bit dubious, especially in the Internet age.

But this is all irrelevant when it comes to making her a saint.

Because the sainthood of Mother Teresa has nothing to do with holiness, her work in India, miracles (dubious or not), or the betterment of mankind and the Catholic faithful. It boils down to MONEY. Let’s face it: Mother Teresa is a cash cow.

Making Mother Teresa a saint will do the exact same thing that making JPII a saint accomplished: Billions of dollars in donations for Catholic coffers. Billions. And these donations will not only be coming from developed nations—they will be coming from the poorest areas of Catholicism, because the poor were the focus of her work.

The money won’t stop there.

Soon, we will be seeing her face on merchandise (Vatican sanctioned or not), Catholic appeal brochures, church bulletins, and cathedral banners. Her name and legacy will be invoked in homilies, used to encourage “sacrifice,” and publicized to widen the appeal of her and Catholicism as a whole.

And because no one knows the value of propaganda like the Vatican, making Mother Teresa a saint sooner rather than later ensures the buy-in of the current generation—who will participate in the excitement. The Vatican wants “good buzz.” Waiting longer to make her a saint means that less people will remember her and require that the church educate younger generations about her work and legacy. That’s an excitement killer.

There’s another big Vatican side benefit to Mother Teresa’s sainthood: Sainthood shuts down criticism. It’s tough for survivors and advocates to criticize John Paul II’s involvement in the cover up of child sexual abuse when we keep having to refer to him as “Saint JPII.” We are seen as “attacking the faith” instead of criticizing a man and his actions. The same will most likely happen to Mother Teresa’s critics.

Not that that should stop them. It didn’t stop us …