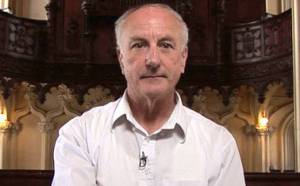 Oliver O’Grady is like a cockroach: He will never, never, ever go away.

A new Oliver O’Grady victim has come forward and filed a lawsuit against the notorious predator and the Diocese of Stockton. SNAP will have a press conference tomorrow to release details. On the heels of the Michael Kelly verdict, this is very, very disturbing news. I have yet to see any kind of apology from the diocese for either Kelly’s actions or the horrific legal hardball tactics that the diocese employed in an attempt to scare the victim into dropping his suit.

Here is the press release:

What: Holding signs and childhood photos at a sidewalk news conference, victims of child sex abuse and their supporters will announce a new lawsuit against notorious child molesting priest Oliver O’Grady and the Diocese of Stockton.  The lawsuit says:

Where: Outside of the Stockton Diocese Headquarters, 212 North San Joaquin Street (at Channel) in Stockton

Who: Three-to-four victims of child sex abuse and their supporters who are members of a support group called SNAP, the Survivors Network of those Abused by Priests (SNAPNetwork.org). They will be joined by a former priest and monk—now advocate for victims—who is an expert on O’Grady.

Why: This week in San Joaquin Superior Court, a 25-year-old victim of convicted serial predator Oliver O’Grady filed a child sex abuse and cover-up lawsuit against the Diocese of Stockton. The lawsuit says that the former priest molested the boy when the victim was five and six years old. During the time, O’Grady was assigned to St. Andrews in San Andreas and St. Anthony’s in Hughson, California.

The victim was molested in 1992, just before O’Grady was arrested in Calaveras County. According to press reports and court documents, Stockton Diocese officials knew that O’Grady was a direct risk to kids as early as 1976. Police investigated other allegations against O’Grady in 1984, when O’Grady admitted to a mental health practitioner that he had molested children. Instead of removing O’Grady from ministry, then-bishop Cardinal Roger Mahony reassigned O’Grady to St. Andrews parish. The victim in this case was born in 1987, three years after church officials had direct knowledge that O’Grady was a child molester. http://www.bishop-accountability.org/ma-bos/settlements/SettlementStocktonOGrady.html

O’Grady was convicted in 1993 of four counts of lewd and lascivious acts against two minors. In 1998, the two victims in the case won a $30 million settlement against the diocese. O’Grady was paroled in 2000 and deported to Ireland.

In January 2012, O’Grady was sentenced to three years in prison for possession of child pornography, after law enforcement discovered the images on O’Grady’s computer and USB drive. According to press reports, the images were of victims as young as two.  http://www.irishtimes.com/newspaper/ireland/2012/0131/1224311002517.html

O’Grady was the subject of the 2006 Academy Award nominated documentary “Deliver Us From Evil,” in which O’Grady admitted to molesting at least two dozen children. The actual number is believed to be closer to 100 http://www.bishop-accountability.org/news2008/11_12/2008_11_20_Smith_AbuseSuit.htm.

Before O’Grady’s latest arrest, he was discovered volunteering with children in a church in The Netherlands and working in a McDonald’s, where he coordinated children’s birthday parties.

Last month, a jury voted unanimously that another Stockton priest, Fr. Michael Kelly, was liable for molesting retired Air Force pilot Travis Trotter. http://www.modbee.com/2012/04/20/2166315/stockton-diocese-settles-with.html After the verdict, Kelly fled to Ireland.  The Stockton Diocese finally settled the case for $3.75 million.  To date, they have not apologized to Travis or acknowledged Kelly’s civil crimes.

According to church records, Kelly and O’Grady, who were both from Ireland, worked in many of the same parishes at different times, including Our Lady of Fatima, Presentation of the Blessed Virgin Mary, St. Andrews, St. Thomas Aquinas and St. Joachim’s http://www.bishopaccountability.org/assign/O’Grady_Oliver_Francis.htm#shorthand. SNAP believes there may be many more victims of both men who have been shamed into secrecy and silence.

The victim in this case is represented by Sacramento attorney Dr. Joe George (916) 641-7300, joe@psyclaw.com