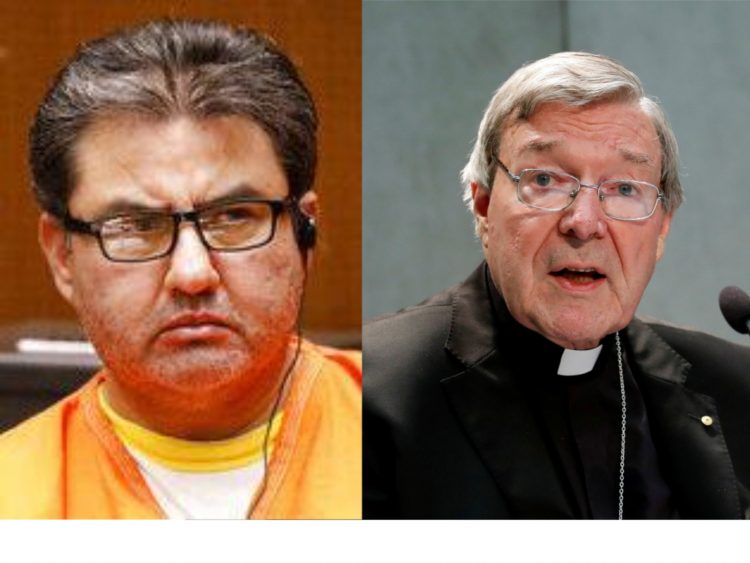 “The Apostle” and a Cardinal. The self-appointed leader of a Mexico-based religious sect and the former Treasurer of the Vatican.

Two men accused of and jailed for child sexual abuse.

Now, both have had their charges reversed. Justice has not been served.

Naason Joaquin Garcia, the head of the La Luz Del Mundo mega church sect, was arrested in June for child rape, child pornography, and human trafficking. One of his alleged victims, speaking publicly after filing a lawsuit against the church in February, told the Los Angeles Times:

“For nearly 22 years, I was made to work for, travel for, lie for and give my body to an organization that saw me as nothing more than a source of profit and sexual pleasure”

Advocates estimate that there are thousands of victims across the United States.

Unfortunately, “procedural errors” by the California State Attorney General’s office caused the State Court of Appeals to order all charges against Garcia dismissed this week. From the Los Angeles Times

The appeals court ruled that because Garcia’s preliminary hearing was not held in a timely manner and he did not waive his right to one after an amended complaint, the complaint filed against him must be dismissed.

The problems don’t end there.

In Australia, the highest court there reversed the 2018 conviction of disgraced Cardinal George Pell. Pell, who was convicted of molesting two boys, walked out of prison after the court determined that “jurors ignored “compounding improbabilities” caused by conflicting accounts from the cardinal’s main accuser and other witnesses.“

The trial, as well as this new decision, have been criticized for the secrecy surrounding them.

What do we do with this?

Officials in California can refile charges against Garcia, and as of the date of this writing, “The Apostle” has not been released from jail.

It is unlikely that Pell will be retried, unless other accusers come forward.

That is the key phrase: unless other accusers come forward.

It is very easy for survivors to become discouraged when when the justice system doesn’t work in cases like these. But I encourage something different:

This is the time when survivors and those who support them should stand up, reach out, and find those who have also been suffering in silence.

Now is the time to come forward and encourage others to do the same.

How can we do this?

One of the best and most effective ways to end abuse is for survivors to stand up and be counted. Only then will predators and those who cover-up for them be put on notice that they can no longer prey on children.

What happened with Garcia and Pell must never happen again.