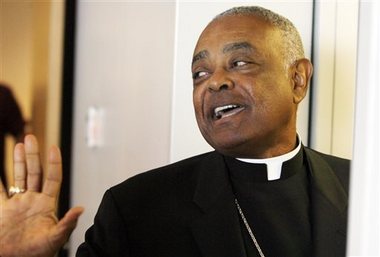 The Georgia State Legislature is trying to pass a bill to help adult victims of child sexual abuse.

The legislation, dubbed the “Hidden Predator Act,” extends the statute of limitations for victims from age 23 to 38, and creates other avenues for adults to sue long after that age.

This is not groundbreaking legislation. It does not remove the civil statute for child sexual abuse, like many states have done, nor is it the two, then four-year civil window that we saw in Hawai’i.

But that isn’t stopping the Catholic Church, which only represents about 10 percent of the faith-based population of Georgia, from trying to stop the movement in its tracks.

In a statement, Archbishop Wilton Gregory said that the bill is “unfair to the church.” He states that lawsuits brought by the bill would “drastically damage their ability to carry out the mission of the Catholic Church.”

Here’s what I don’t understand: Why is anyone listening to him?

Let’s look at the facts:

Wait! What? I think he’s trying to tell us he has a huge child rape problem.

Let’s look at what this law WILL do: expose people abusing right now within every aspect of life in Georgia –  daycare centers, preschools, camps, other churches, group homes, theater companies, gymnastics and swim clubs (that have been rocked by cover-up scandals), community groups, after-school organizations, sports teams, explorer groups, and other institutions.

Predators will be exposed by victims who have NEVER set foot in a Catholic Church or school. What gives Wilton Gregory the right to determine how a victim from a daycare center chooses to expose the person who raped them?

The victims in these institutions should have the right to come forward when they are ready, not when the Catholic Church or an old law says they should.