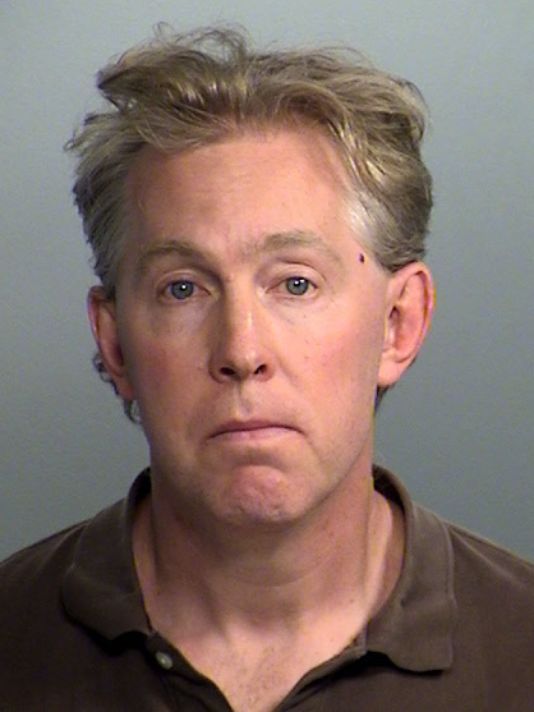 So what about celibacy?

Larry Nassar was married—so were many of the accused coaches at USA Swimming, accused bishops in the Mormon Church, as well as our pal Jerry Sandusky. But the institutional cover-up remains almost as fierce as that within the Catholic Church.

A sneak peek at a non-celibate priesthood

Let’s address our key question: Would things be any different in the Catholic Church if priests were allowed to be married?

Lucky for us, we got a sneak peek this week:

Reverend Luke Reese, 49, was ordained at The Cathedral of Our Lady of Walsingham near Spring Valley in 2016. He then moved to Indiana where police say last September, he kidnapped, beat and terrorized his wife of 25 years.

Reese is a former Anglican priest who is now of the Personal Ordinariate of the Chair of Saint Peter, a Houston-based Catholic religious order for former Anglicans in the United States. As such, they are allowed to be married. Reese and his wife had seven children.

Read what he’s accused of doing to her. It’s bad.

According to the unfolding investigation, Fr. C. Ryan McCarthy, the pastor of Holy Rosary, where Reese was now assigned, came to Reese’s house the day after the alleged assault:

The next day on September 25th, the victim says Father Ryan McCarthy from Holy Rosary came to their home and saw her bruised face. She says McCarthy urged them to spend time apart.

Unlike child abuse cases, clergy members are not required by law to report domestic abuse.

This is after Reese he told witnesses he could have killed his wife.

“Mind your own business”

I haven’t gotten to the coup de grâce.

McCarthy turning a blind eye to domestic violence is the cowardly action of one man putting a woman’s life in direct danger. As a priest and a pastor, he is the first line of defense for many women in domestic violence situations. He should have been the one taking her to the hospital and the police, not covering up for her alleged attacker.

McCarthy did one better. He gave us a peek at the institutional response in the October 1 bulletin. Not only does he tell people to “mind their own business,” he also tells them that gossip is a sin. 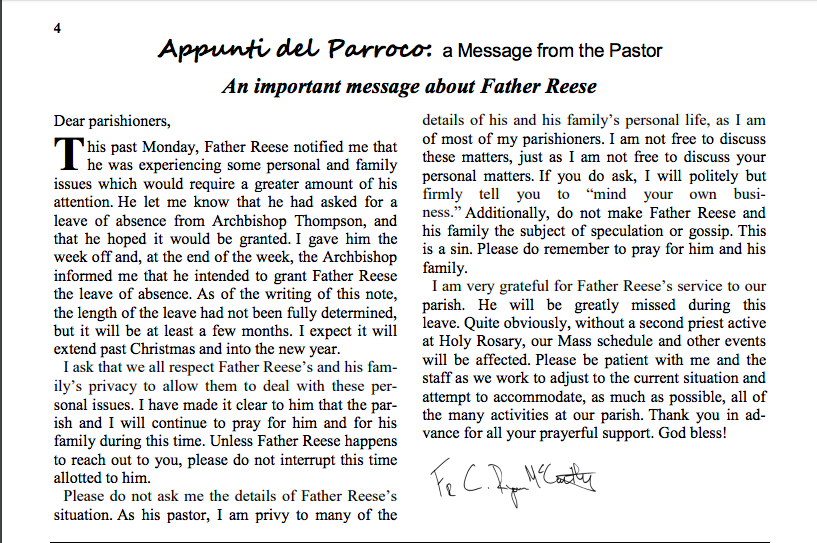 A sin? Talking to your family about domestic violence? Providing information to authorities? Being open and honest about what is going on in your faith community?

You see a woman being beaten? Mind your own business.

You see a child being sexually abused? Mind your own business.

So if the cops come and try to talk to witnesses in the parish who may have seen Reese beating his wife, guess what a parishioner’s response will be?

“I really don’t know. Those bruises I saw? The yelling? I can’t speculate. That’s a sin.”

Married priests will solve nothing. The institutional response will remain the same.

*Note: Since Reese’s arrest, his religious order has put out a statement condemning domestic abuse. The Archdiocese of Indianapolis has only said this, according to the Indy Star:

Because Reese’s archbishop is in Houston, Indianapolis Archbishop Charles C. Thompson cannot immediately make any official decisions regarding discipline and Reese’s status within the church, according to Greg Otolski, a spokesman for the Archdiocese of Indianapolis.

The damage has already been done.