I have been brewing about the bankruptcy debacle in Gallup for the past few days. And I keep coming up with the same fable:

Mortimer Snerd gets a speeding ticket. Instead of paying the ticket or going to traffic school (that is, being accountable for what he has done), our pal Snerd goes to the judge and says, “I am so poor. Look at my unitemized list of belongings. I am one of the poorest people I know. I have less than a fraction of the wealth of the majority of people in Newport Beach. I live in a simple condo and a family to support. I just can’t pay what you ask.”

But the truth is this: Snerd CAN pay. He has a job, knew he was speeding, and is just trying to get out of being accountable. He can pay the fines for his transgressions. But now, he claims he’s a victim, because he is not a multi-millionaire.

Snerd wouldn’t have an argument if he lived in Boise, where the same salary puts him in the 1%. It’s all in how he chose to frame himself. He’s not poor. He’s just not mega-rich.

So, we move on to Gallup.

Gallup Bishop James Wall is saying that the diocese is poor. Well, compared to dioceses like Orange, CA, Gallup is poor. If you compare yourself to the richest man in the room, of course you are going to look like a pauper. But the recent actions of Wall and other Gallup diocese leaders lead me to believe that Wall sits on a pile of wealth bigger than he is willing to let on.

And then, there’s this: 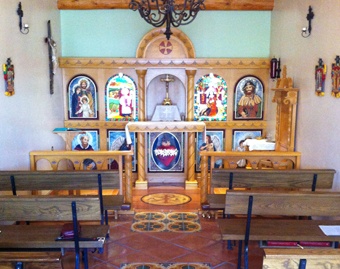 This is the newly renovated chapel attached to Bishop Wall’s residence. Don’t bother trying to see it—it’s only for priests and seminarians. According to the Catholic News Agency:

The process has been years in the making, and is nearly completed. The chapel has received a new altar and retablo, a celebrant’s chair, sanctuary rail, stations of the cross, flooring, and an image of Our Lady of Guadalupe. A lectern and pews are still in the process of being prepared.

One of the priorities in commissioning the chapel, Fr. Keller said, was “to use the art that’s unique and local,” working with “New Mexico artists who are unique, and worthy as well.”

The artists, the article said, were paid by donations from parishes and wealthy Catholics.

So, let me get this straight:

—Gallup can raise money for a private chapel and pay commissioned artists, but they can’t raise the money to do a 2013 audit?

—The chapel was completed on time and artists were paid, yet the diocese has “undated loans” to help with the bankruptcy process?

—James Wall can put together budgets for the completion of the chapel and pay artisans for their work, but he can’t provide the courts with itemized budgets or help pay for victims’ counseling?

We should all be so poor …